Family Caregivers and Caregiving: Then And Now

Take a moment. I’d like you to think back to when you were a child. Hanging out with your friends. Riding your bike. Skating. Going to school. Doing homework. Relaxing at the beach during the summer.

In memory, everything seemed so easy and straightforward.

Dads went to work. Moms stayed home. Communities were more closely knit. Grandparents (sometimes great-grandparents) lived nearby and when they could no longer take care of themselves, they’d invariably move in with us.

It was hardly unusual for generations to live together. On my block alone, there were three houses that were multi-generational, mine being one.

Back then families “took care of their own.” Grandma and/or grandpa would get their own room, extra places would be set at the dinner table and life would go on as before. We kids may have gotten yelled at by either Mom or Dad, “kids, kids,” they say in a hushed scream, “grandma (and/or grandpa) is trying to rest” but that was about it.

Oh, there may have been a bump or two, a raised voice here or there, but for the most part, things seemed to flow. No muss. No fuss. Grandma (or Grandpa) just seemed to fold into the family.

Assisted Living facilities didn’t exist and nursing homes were places that no self-respecting son or daughter would ever relegate their parent(s) to.

From our vantage point as children, family caregiving seemed like the most natural thing in the world and from what we saw from our parents, caregiving was a family matter. Period.

Things are different . . . sizably different. The biggest difference, of course, is that now we are the adults. The problems we were once sheltered from are now the very things we’re dealing with and the issues we were protected from by our parents are now what we are protecting our children from.

But that’s not the only difference.

What was true and accepted when we were kids isn’t so much anymore. Men aren’t the sole breadwinners and women’s roles have expanded to include professions unheard of in our mother’s day: doctors, lawyers, managers, even astronauts.

According to a 2017 blog from U.S. Department of Labor,

Which mean that almost half the women working outside the home today aren’t do it for personal satisfaction, but for economic survival.

According to the same blog post, 45% of women are marketing and sales managers and 27% are chief executives, indicating again, what we already know, that women in this generation don’t just have jobs, they have careers and are not just working but are in positions of leadership.

That said, in Caregiving In The U.S., a 2015 report by AARP, ”The majority of caregivers are female (60%).” Roughly translated – family caregiving still defaults mostly to women even as women are more and more in the workplace (and in positions of power).

A generation ago, when grandma or grandpa needed someone to go with them to the doctor, for example, it would be no problem. If Mom worked, she’d simply call her boss and tell him that she needed the day off. It’s what my mother did when my grandmother had to go to the doctor. And no, the boss wasn’t happy about it but . . .

The problem, as I see it, is that while societal expectations and responsibilities have altered, the way we approach caregiving (the prism by which we view it) really hasn’t.

We remember the way our mothers approached it and try to do it the same way. For many of us, family caregiving is still considered a private matter. Oh, we may discuss, even complain about it, outside the family, but we still look for solutions within the family, turning to siblings or other relatives for help and guidance even though we know we’re likely not going to get it.

So, the question becomes how do we do this thing called caregiving in a way that honors who we are now, in this generation.

The first thing I think we need to do is not blame anyone. Not our sibling that won’t pitch in. Not the uncle who likes to tell us what we’re doing wrong. While they may infuriate us, we have to remember that they are as scared as we are and are doing the best they can even though from our perspective what they are offering is so incredibly not.

The second thing I think we have to focus on is how we’re going to find ways (save, sane and healthy ways) to care for our loved ones while still tending to all the things we have to tend to. It’s going to take creativity, patience, honesty and yes, even a little humor to find the answers that will meet our needs. But I have confidence that we will find them.

For some, it’ll mean that their loved one will stay in their own homes and be monitored by a visiting nurse. Maybe they’ll have a homecare attendant during the day or maybe as a live-in.

For others, assisted living or nursing home might be the best option. And I know that there’s a stigma about this whole idea of adult children placing their elderly parents into such facilities. I know it because I was on the receiving end of it when it was time for my parents to go into assisted living.

People seemed to feel so comfortable saying things. Hurtful things. Things that made me feel guilty. And even if they didn’t say anything, I could feel their disapproval. It wasn’t helpful. To be honest, it only made a difficult situation worse.

So, I’m actually the last person who will ever tell anyone what I think they should do. I do, however, think it’s important to shine a light on options.

While I wouldn’t say that it’s the norm to have elderly parents or grandparents living in assisted living, I will say it’s far more common and getting more common all the time. According to an article on American Senior Communities’ website, “Currently, around one million Americans live in some type of senior living community, and that number is expected to double by the year 2030.”

Thanks to the reforms in the 80s, nursing homes have gotten sizably better. That said, not all are good and family caregivers would do well to be vigilant to make sure that their loved ones are being properly cared for.

While not all nursing homes are as good as the one my parents were in, we have to remember that they have to adhere to certain guidelines or risk penalty. Of course, with the easing of fines (NY Times 12/24/2017) we’re going to have to see how all this shakes out. My advice is for family caregivers to be extra special vigilant. Drop in when the staff is not expecting you. Enlist other family members and friends to visit. Get their opinion of how things are going.

It’s especially important because we are so busy as caregivers, employees, spouses, and parents, that we reach out to others (friends, a clergy person, a counselor, therapist or any other professional working with family caregivers) even before we feel like it’s getting too much. That way we can prevent that overwhelming feeling and avoid the risk of burnout.

It can be so helpful and healing to speak to someone who actually understands what it’s like and who knows what it’s like. And it could end being that they’ll have a simple solution to a problem you’re having but, because you’re in the middle of it, you can’t see.

We also have to allow ourselves the “luxury” of not being perfect and understand that because of the ways society has changed, no matter how much we may want to, we simply can’t be the way we remember our mothers being.

Karen Bromberg is the founder of Help You Thru, LLC, an online resource for family caregivers offering resources, relaxation and relaxation techniques to overwhelmed caregivers. Feel free to contact her, either by email at staff@helpyouthru.com or via phone 929-276-2109. Want to get more information about how you can make your caregiving journey easier, simply fill out the form below and join our mailing list. 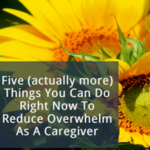